If you shop at Amazon.com (for anything), use this link to support MyFordFreestyle.com!

This is more of a rant and ramble then a proper question, but does anyone really know anything about the head unit / speakers in the FS/X? I replaced my totalled 06 Focus Wagon with an 08 Taurus X, and while the head unit appears to be the same (6 disc, MP3), they're two completely different animals.

The first thing I noticed was the output levels from the X deck was ten times that of the deck in the Focus. Is there an amp hiding somewhere in the dash or doors, or is it really just that Visteon (or whomever) drastically changed the amplifier section of these decks?

Secondly, in the Focus, I had replaced all of the door speakers with Infinity Reference 6x8's, and put a 10" powered Infinity BassLink sub in the trunk, something that I'll be completely unable to do in the X. Any advice on adding a sub to this monstrosity in such a way that I'll retain the abilty to fold down/up seats at will? Thought not.

Point C, does everyone's speakers suck, or is it just me? I can't tell if the head unit's amp is clipping, or if the speakers are breaking up. At low volumes, when the head unit's Loudness EQ kicks in, the low frequency material is so much that it "chops" up everything else the speakers are doing (can't remember if that's intermodulation distortion or harmonic distortion... been too long). At high volumes, I can tell the head unit has some compression built in, but it still has a fair bit of power. But distortion! Bah! 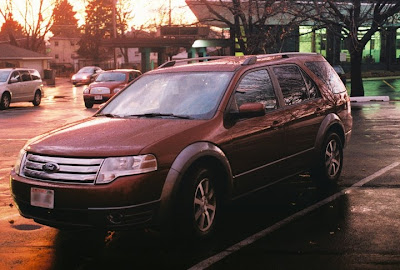 I think the stereos are different between the Limiteds and the SELs? I have a Limited and it has a great factory stereo that I believe includes some form of sub-woofer in the right rear kick panel. No plans to upgrade.
2008 TX Limited
Silver Birch Metallic/Black leather
WeatherTech floormats all rows
Bought used on 17 Nov 10 with 20,000 miles
Top

Yes and no. There are three different head units used in the FS/TX lineup: the single-disc MP3 unit, the six-disc MP3 unit, and the Nav unit. FS stereos may have chrome rings around the controls, they may not. TX units have chrome rings on all three stereos. However, the guts between them are, as far as I can tell, the same. The "Audiophile" system in the FS uses two-way "plate" style 6x8 speakers which consist of a 5 1/4" mid-bass and a fabric tweeter. Last I checked, these were made by Pioneer, as are the Nav headunits. They may, however, be made by Sony now. The subwoofer you speak of is either a six- or ten-inch (although I understand it to be a sixer) mounted in a thermoplastic housing in the rear right kick panel (the rear left normally houses the aux. hvac unit). The amplifier for the sub is also attached to the housing, and it is a Sony unit.

So, there are some vasty differences in speaker configuration, but not that much in the way of head units.

Still, the stock speakers of my TX are lackluster: I did a little snooping, and they're just full-range units, with a whizzer cone in the center, which explains the distortion I hear. Now, mind you, I'm kind of a snob when it comes to my music: my computer speakers are a pair of NHT SuperZeros driven by a Yamaha component amp, my living room TV has a Pioneer Elite HT system and Canton speakers, and my main system... well, it probably violates some electrical code with the amount of current it draws. My center channel has its own built-in 250 watt powered sub. Thank you, Def Tech.

I was just hoping someone on these forums has the same stock system I do, and the same picky taste about sound as I do, and could lend some pearls of wisdom... otherwise, I guess I'll have to balls it and figure the damn thing out myself. Of course, it would serve as a wonderful guide for anyone else out there trying to improve their stereophonicity.
2008 Taurus X Merlot / Pewter SEL AWD

-I have a subwoofer box I'd be willing to sell. It's not hooked up, since I glassed in a sub into the spare tire well (I'm carrying some Fix-a-flat and some hope...). I has a Tang Band 6" sub installed, and I've stiffened the box a little. It's not great, but better than original. Send me a PM if you're interested. It's still stuck in the car, so I'd need to remove it--which is why I hadn't posted it for sale...

-The frequency response of my head unit was actually quite flat, measured w/a RTA. The problem is the amp, which starts distorting almost immediately. You could run the stock head unit to an amp with line level inputs, or run it to a processor which accepts line level inputs (like a JL Cleansweep) or you could just ditch the head unit all together. That's what I did--though it's certainly not necessary, since the signal coming from the HU is actually good. I wanted a way to easily integrate my Ipod and navigation--and I also wanted to be able to control processing with the HU--so I swapped the HU to an Alpine W205.

As far as speakers, the factory speakers are reallybad, but the good news is that there's a LOT of room in the doors. I've actually had 8"s in there for a while when I was running horns under the dash. You can easily fit a set of components, say 6 1/2" (woofer and tweeter both) in the door for a totally stealth install, and the speaker location is actually decent.

One thing that will really help the sound (and the overall driving experience for that matter) is to spend some time deadening the doors and the floor. It cut down on the noise dramatically, and it keeps the doors quiet once you get speakers in there.

If you want some suggestions on that, let me know. I took a bunch of pictures when I did mine, but it was a long time ago and I'd need to dig up the photos.
Top

So without tearing panels off the vehicle, how do I find out if my 2006 Ford Freestyle Ltd. has a sub woofer in the stereo system?

They came standard with it, and are located in the cargo area on the passenger side.
03 Ford Explorer Limited V6
06 Ford Freestyle Limited AWD
05 Ford Mustang V6
Top

As for the subwoofer, Maybe you could mount a smallish one in a box in the small gap between the 2nd and 3rd row? It would have to be a small sub and you'd have to do some work to prevent people's feet from killing it but that could work. There's about a 6 or 7" gap under my 3rd row seat when folded down there.
Top
Post Reply
7 posts • Page 1 of 1

We are a participant in the Amazon Services LLC Associates Program, an affiliate advertising program designed to provide a means for us to earn fees by linking to Amazon.com and affiliated sites.

All site content Copyright © 2004- MyFordFreestyle.com
We are in no way affiliated with Ford Motor Company